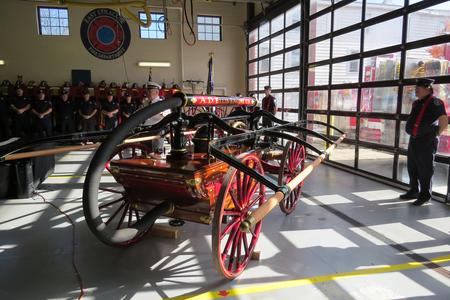 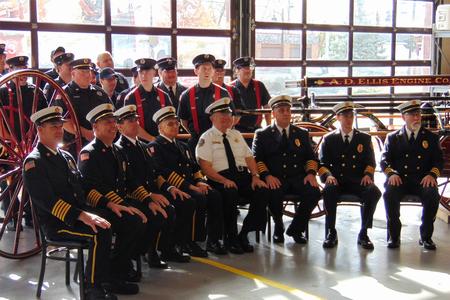 CNY Member Don Herb recently made an extremely generous donation to the East Syracuse Fire Department. Among Don's collection of early hand and horse drawn fire apparatus were two significant local pieces that originally belonged to the East Syracuse Fire Department. The department was formed in 1887 and the first three pieces of equipment were manufactured in 1888 by Rumsey in Seneca Falls, New York. Don acquired the hose cart and the hand pumper about 25 years ago and had them beautifully restored. The whereabouts of the third piece, a horse drawn "hook & ladder", is unknown.

Don made the decision to return the pieces to East Syracuse and an appreciative department organized an unveiling and welcome home ceremony on November 1st, which was attended by numerous local dignitaries and fire department representatives from neighboring departments. Don addressed the gathering telling those in attendance that he  wanted to see that the equipment is taken care of and preserved for future generations. He estimated the value of the two pieces to be between $75,000 and $90,000. Don was made the first ever Honorary Member of the East Syracuse Fire Department and awarded an appreciation plaque for his donation.

Don is shown below with East Syracuse Fire Department officers and firefighters and addressing the gathering with the 1888 hand pumper in the fore ground.